This page was the hardest for me to write. How can I put someone like Bill into words and pictures? It was not easy for me, and I hope I can do justice to Bill's memory with this website, at the very least with this page. Bill was a war hero, a provider, and wonderful story-teller, but most of all he was my grandfather. I didn't spend as much time with him as I would have liked to, I never understood the things that he had done until I was older. Bill and his wife, Alberta, once said that they were afraid that the efforts put forth by the vets during WWII were being forgotten. 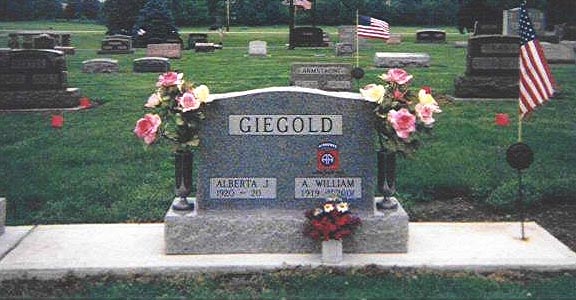 If we as a country ever take our vets for granted, we will be opening ourselves to more criticism, more physical and moral attacks. Bill lead a very complete life, he did things most of us might just dream about, and he experienced things the rest of us have nightmares about.

Born on September 21st, 1919 to Albert G. and Mildred L (Anderson) Giegold, he married Alberta J Martin on August 24th 1941. He enlisted in the Army at the age of 23 and he joined the 82nd Airborne and became a member of one of the most influential forces during WWII. He fought for 33 days with little sleep and no reinforcements. He was decorated with medals from Holland, Belgium, and France, as well as medals from the US. He earned accolades that few ever received. Holland bestowed the Order of WIlliam, Knight of the 4th Class upon Bill, and he was given the French and Belgium Croix de Guerre (Cross of War). He was also decorated with 4 Spearheads for each invasion he was a part of. He was given the Purple Heart for being blown up and for being shot. He also had the honor of becoming a member of President Eisenhower's Honor Guard. For those of you that never got the chance to meet Bill, I am publishing part of a paper I wrote about him while I was in college. 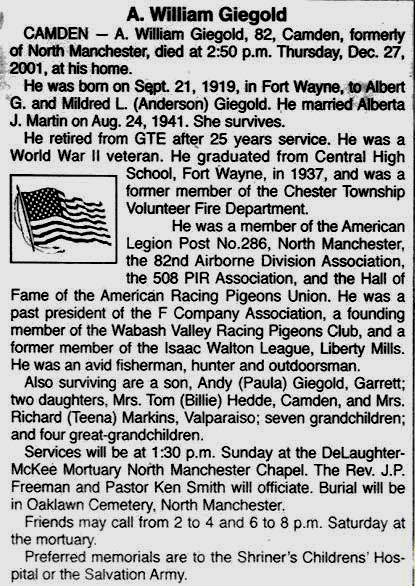 Bill's obituary from the Camden, IN newspaper.

It was written almost one year before he died, I did a little editing to it after he passed away, but hopefully you the reader still get the idea.

Some people say that when a person gets older, they tend to get slower, they might become forgetful, and is most cases their bodies become more frail. That may be true, but that is not totally the case when it comes to my grandfather, Bill. Most of the grandkids just called him Bill, I don't recall anyone ever referring to Bill or his wife, Alberta, as Grandma or Grandpa. Pushing 80 years old, Bill could still weave a wonderful tale of his life during World War II. Most of the grandchildren in the family looked up to and respected Bill for this very reason. You wouldn't have thought much of Bill Giegold if you were to look at him. At first glance you would think that old age had gotten the best of him. He developed a disease called polycythemia vera (poly-si-thE-mE-a vir-a); basically it increases the overall volume of blood in a person's body. It's effects are horrible to watch someone experience, it's like they are wasting away right before your eyes. Bill was not as strong as he used to be, but his mind is as sharp as it ever was. I can remember one of the last times I saw him, we were sitting in my mother's dining room and he was telling me a war story. Surpisingly enough, it was one I had not heard before and for good reason. It was the last story he ever told me and I'll never forget any part of it. I'm sure he had told that story a thousand times, but to me, I was the only one that ever heard it. I'm not going to tell you about it now because that was between he and I.

He was also blind in both eyes, so he didn't move around much, unless there was someone to guide him. He had become almost completely deaf, due mostly to the explosion when he was blown up during the war, but the disease took away a considerable portion as well. There were many times as a small boy that I can recall sitting in my grandparent's living room after dinner listening to Bill relate tales from the war to friends and family that were visiting. Bill's stories were very graphic and detailed, and they gave you a horrific sense of the effect that war had on his life. It seemed to me, when I was old enough to understand, that it was almost as if Bill had left a part of himself overseas after he was discharged home. I guess that is very true for most veterans of any war. I remember sitting in his workshop, watching him catalogue various bullets and war memorabilia while he smoked his pipe. That is one smell I will never forget about him, if you've ever been around a person that smoked a pipe, pipe tobacco has a very distinguished aroma to it, it's usually a very sweet smell that lingers in a room for hours after the pipe has been extinguished. It surrounds you and makes your eyes heavy with sleep. I did my best to keep from falling asleep, just in case I missed something important that he was saying. On more than a few occasions I would fall asleep and dream about the places he was talking about.

Bill took up pigeon racing when he got back from the war. In his county and throughout the country even, he was known for his pigeon breeding expertise and knowledge. He had been offered as much as five thousand dollars for a bird. Pigeon racing was his hobby and he loved doing it. Bill used to take me to the local coffee shop for breakfast when I would come to visit, it was our morning ritual and I tried not to oversleep. My grandmother never went with us, because it was for us "men" only. I always felt like one of the guys when we went, only I was a lot younger and shorter than the rest of the group. I had my first cup of coffee on one of our morning coffee shop visits, I was about seven years old. I'd sit and listen to the guys tell their stories. Bill was friends with everyone there, and they all knew him by name, including the owner. Everyone in town knew Bill, either by reputation or from a long time friendship.

Christmas and Thanksgiving were always fun. Bill always got a new flavor of tobacco, I don't know if he was ever really excited by it, or if he just put on a show for us all. Soon after opening his new pouch of tobacco, he would stuff his pipe and watch the rest of the festivities, and he was rarely interrupted. During Christmas, the grandchildren that were old enough would get the joy of passing out the gifts, one of us always wanted to be the one to give Bill his new tobacco. When Bill would say something, he was usually not interrupted because of his commanding presence and because you got so wrapped up in what he was saying that you didn't want to interject anything. And such was our life around our Bill; you didn't interrupt, you didn't fall asleep while he was telling a story, and even days after you left his house, his pipe smoke still stuck to you and we all knew not to drink our bathwater.

I read a quote in a book once, although I do not recall who said it, it has always stuck with me; 'One should not measure a man's life by his wealth or his property, but rather by the love and respect he receives from his family and friends.' I know now for that reason alone, Bill was the richest man in the world. The day he died was one of the saddest days in my life until my mother died several years later, but at least I know he lived a full life. Some folks don't even get a chance to do that.

It seems only fitting to have "Taps" playing here.