Deposition taken from Bill Giegold: During the morning of 25 January 1945, my small unit fought for and captured the town of Trois Ponts, Belgium. Refuge was several buildings and houses to ward off the bitter cold. At that time it was discovered by Captain Harold Martin that the remaining grenades were not evenly distributed amongst the men. Being the Armorer, Capt. Martin order me to have all of the grenades turned in for further redistribution. The grenades were brought to a stone three-story house. Soon after, the house was completely disintegrated from a terrific explosion. Twelve men were involved, either killed or wounded. Later it was learned that the retreating Germans mined several of the buildings, and that it was possible this building was mined resulting in the ignition of the grenades. 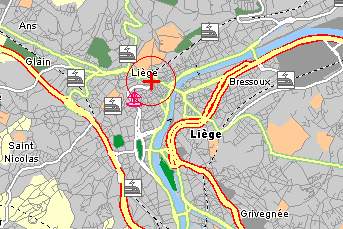 Being buried in the stone and wood debris, I was excavated by my buddies then relayed from front line medics to a general Army Hospital Unit operating in Liege, Belgium. The identification of the hospital unit is unknown to me. Upon arrival stone, wood, and mortar were removed from my head, chest, and hands. A piece of wood was under and pressing on my right eye, hearing in my left ear was destroyed, my nose was split diagonally from side to side, skin was blown from my face, the back of my hands and chest, and my mouth was damaged both inside and out, resulting in several teeth that were knocked loose. Approximately a week and a half later I was moved to a schoolhouse due to the heavy front-line casualties arriving at the hospital unit. A week later I was moved to the town of Verviers, Belgium for further rehabilitation. This was short lived, as a week later I was sent back to my unit, which was undermanned, and now fighting along the Roer River in Germany. At this time my injuries were not completely healed.