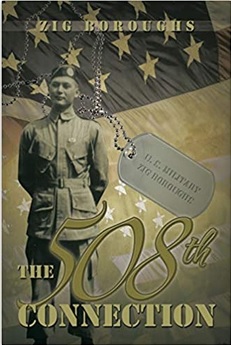 "When I arrived home after my army discharge in 1945, the challenges of adult civilian life excited me tremendously. I passionately anticipated living as a husband and father, no longer separated by the Atlantic Ocean and a dangerous war from my wife and child. I eagerly plunged into active civilian employment, impatient to establish a career of peaceful service to humanity. Although the experiences and feelings of World War II affected by attitudes and ideals, my energies were so devoted to other interests, the memories of the war years were pushed into an inactive part of my brain. For many years I thought very little about the 508th Parachute Infantry Regiment, and I lost contact with all but one of my paratrooper buddies.

Then at 11:00 PM, Christmas Eve 1983, a memory of Christmas Eve 1944 forced its way to the surface. My wife and I were visiting with our daughter, Gini, and her family. We were waiting for our grandchildren to go to bed so that Santa Claus could prepare for Christmas morning. Noticing that it was 11:00 PM, I announced, "Let me tell you what I was doing at this hour thirty-nine years ago!"

I told the story "Burial and Birth," which you may read in this volume. When I finished the story, Gini told me, "Dad, you should write this story and send it to all our family members."

Once I wrote one story, the dam burst and a floodgate of stories awoke in my memory, which resulted in the book, A Private's Eye View of World War II. Many details had faded with time, and I needed to check with my paratrooper buddies to get my stories straight. Senator Strom Thurman's staff helped me locate Jim Allardyce, secretary of the 508th Parachute Infantry Association. Allardyce provided a roster of the association membership with their addresses. This enabled me to verify or correct my stories, A Private's Eye View of World War II. Other veterans of the 508th began to tell me their stories. Some suggested that I write another book and tell their experiences, which resulted in The Devil's Tale.

For over twenty years, I have collected information from others. The most important source of information has come from the 508th veterans. Since I have been associated with the 508th Parachute Infantry Association, I have met hundreds of fellow veterans of the regiment and have listened to their stories. Through the association, I have also met friends of the 508th from England, France, Belgium, Holland, Germany, and Israel. These friends have also given me valuable information. I have chosen the title The 508th Connection to give credit to all those who have so generously helped as friends and as sources of information. The "connections" are much more than sources for writing a book. They are friends whom I treasure. They are closer than friends. We are family.

The 508th Connection tells the stories of the lives of men of the 508th Parachute Infantry Regiment, Eighty-second Airborne Division. As you read the stories in The 508th Connection, you will become connected with their lives—in the barracks, in the pubs, and on the battlefield. The stories are both entertaining and educational. They will capture your heart, your imagination, and your understanding of what it was like for the paratroopers to live through the horrors of war while keeping their sanity and humor. There are humorous stories, romantic stories, and battle stories, stories about being captured by the enemy. There are stories of men who killed to survive, who lived in foxholes, who helped and were helped by local people. Throughout the book, we connect with the paratroopers who relied on each other for survival. This is their story."